The heat island effect on architecture: the case of Allonbay Village 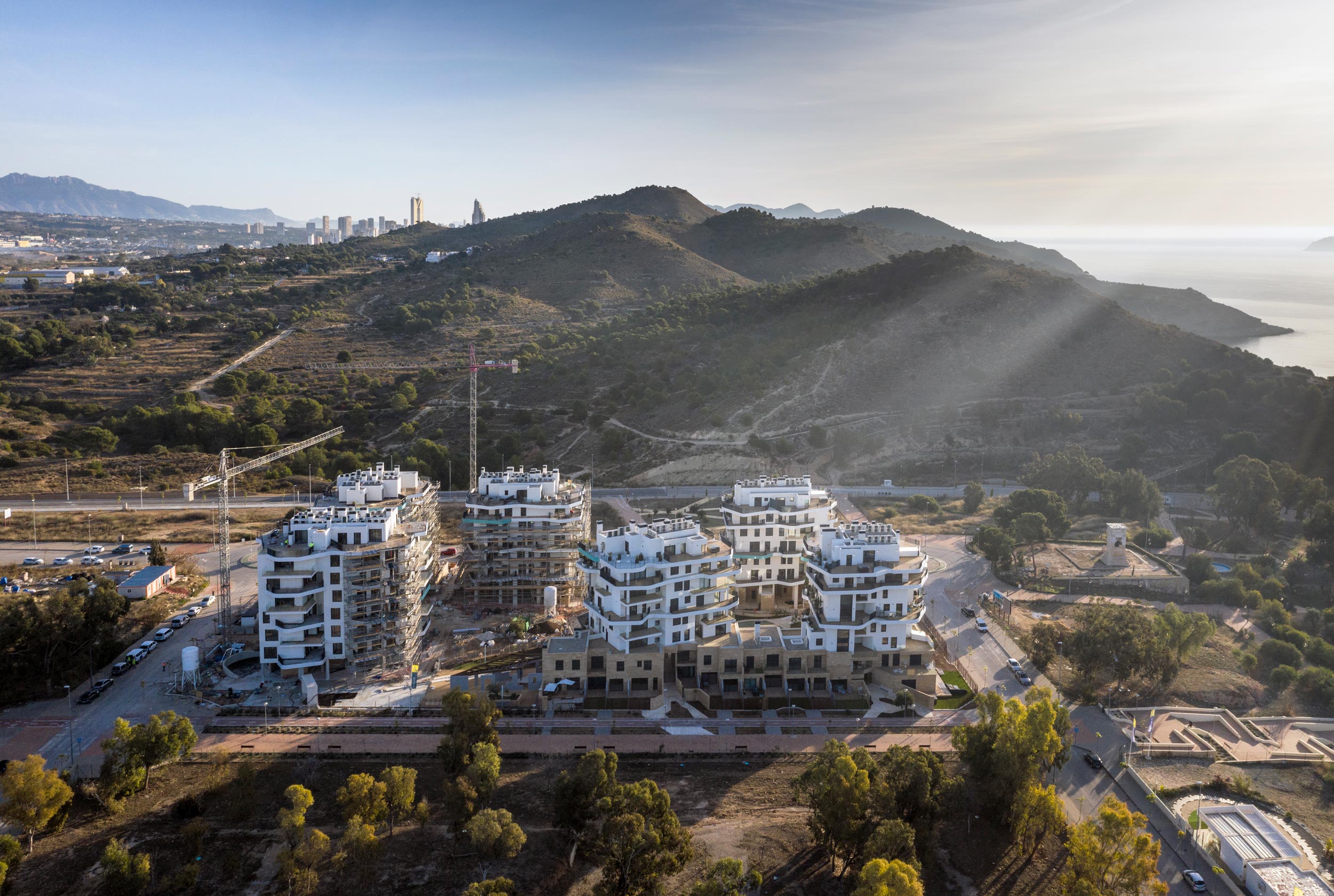 Summer is the time of the year when walking on the street at certain times of the day is unbearable for many of us, especially in parts of the Spanish mainland such as the coastal area of Valencia, where the high level of humidity increases the thermal sensation.

These high temperatures force us to alter some of our everyday activities, such as taking to the streets later in the day or searching for shade on city streets. However, you might well have noticed a temperature difference when you leave an open space, such as a park, and step onto a street lined by buildings.

This is what we know as the urban heat island effect (UHIE). Now, you might not know this phenomenon by its name, but you’ll definitely experience it during the summer.

What is the heat island?

The heat island is a thermal phenomenon that normally occurs in urban areas and basically consists of a thermal contrast between city centres, characterised by mass construction, and nearby rural or suburban areas, where the temperature drops a few degrees.

However, the term ‘heat island’ isn’t new, and has actually been documented for several centuries. It was in 1817 that Luke Howard, an English pharmacist who played a very important role in scientific and meteorological history, discovered that there was a temperature difference between central London and nearby rural areas of up to 2.2°C. But what’s the reason for this change in temperature?

It’s mainly because of the materials used to construct cities and buildings, which slowly release the heat they capture from the sun during the day. What’s more, air conditioning systems used in summer, street lighting and vehicles add to this temperature increase in city centres.

Meanwhile, in rural areas, this temperature increase isn’t experienced, as the natural environment has the ability to capture less heat and, above all, to lose it more quickly.

In order to reduce heat absorption within the development and prevent it from getting too hot, and therefore minimise the energy demand for cooling buildings, a series of guidelines and strategies were proposed in the design phase and implemented in the construction phase to fight against the so-called heat island.

The central space of Allonbay Village – Aqua has communal gardens for residents to enjoy sports, leisure and social activities. In areas like Alicante with scorching summers, these spaces need to be protected from the sun and the heat by trees, which provide shade and reduce the air temperature thanks to the effect of evapotranspiration (in addition to reducing atmospheric CO2, which contributes to decarbonisation and combats climate change, and emitting oxygen).

Transferring these benefits from gardens to buildings is highly effective. A green roof was added to one of the communal buildings in the development, featuring cacti species on a bed of ornamental gravel. This reduces insolation on the roof of the spa and helps prevent rooms from getting too hot. What’s more, the rear sides of the buildings have a system of landscaped trellises with climbing plants that cast their shadow on the façades, which prevents overexposure to the sun and creates a plant tapestry to cool down rooms. 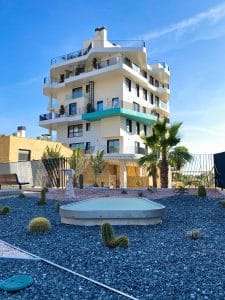 Analysis of the location

The entire development has a highly permeable fence, both in terms of views and the circulation of wind and breezes. What’s more, the layout of the buildings and their curved terraces mitigate the action of major air currents and prevent the creation of wind tunnels. The location of the plot with respect to the Mediterranean helps it receive sea breezes, thereby reducing the temperature in a natural way. Also key is the volume of the residential units with reduced spans (between 20 and 25 metres) and compact floors, making the entire building porous and thereby avoiding the creation of large opaque screens that alter environmental conditions and result in unwanted microclimates.

To help reduce the heat island effect, the development also has two waterways that run through the grounds, which lower the temperature due to the evaporation of the water. What’s more, the three swimming pools at Aqua also help reduce high temperatures, creating a wonderfully pleasant atmosphere for residents. 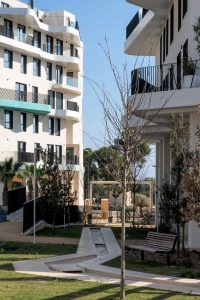 The paths and some communal spaces (with benches) have been protected with trees and shrubs, making it more enjoyable to be outside. We also wanted to highlight the direction of the main and secondary entrance to Allonbay Village with a row of palm trees that follow the diagonal line from the Torre de Sant Josep to the Barranco del Río Torres.

Two types of surfaces were chosen for the façades: one made from natural stone that covers the outside walls of the properties, and a continuous white façade for the towers, which receive more sun due to their height. In both cases, the colours are clear and in line with the landscape study of materials that was carried out for the Allonbay Masterplan.

Not only did this planning, analysis of the location and landscape integration make it possible to reduce the heat island effect, but it also resulted in Allonbay Village receiving the first BREEAM Urbanismo in the planning phase in Spain.

In turn, the Aqua development is governed by the recommendations of BREEAM Vivienda, guaranteeing a huge variety of pleasant spaces that adapt to the needs of residents.

This website uses cookies to improve your experience while you navigate through the website. Out of these, the cookies that are categorized as necessary are stored on your browser as they are essential for the working of basic functionalities of the website. We also use third-party cookies that help us analyze and understand how you use this website. These cookies will be stored in your browser only with your consent. You also have the option to opt-out of these cookies. But opting out of some of these cookies may affect your browsing experience.
Necessary Always Enabled
Necessary cookies are absolutely essential for the website to function properly. This category only includes cookies that ensures basic functionalities and security features of the website. These cookies do not store any personal information.
Non-necessary
Any cookies that may not be particularly necessary for the website to function and is used specifically to collect user personal data via analytics, ads, other embedded contents are termed as non-necessary cookies. It is mandatory to procure user consent prior to running these cookies on your website.
SAVE & ACCEPT